So yesterday I talked about feeding tubes in general and my earlier tubie days, and now I’m going to talk about the rest of it.

After my surgery it took a few months for me to adjust to it all and get myself into a routine, but by the spring I was doing really well with my feeding tube! I was gaining weight, I had more energy and while my symptoms were still present they were being better controlled. And once I got the portable pump and could run my feeds during the day, free from an IV pole, I was actually able to live in the real world a little bit. Probably the most fun I had as a tubie on the go was being able to go my best friend’s convocation ceremony. Photo evidence of said shenanigans: 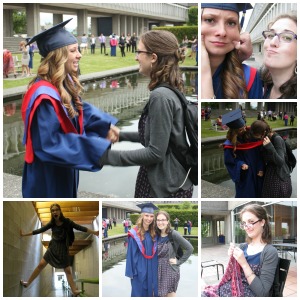 Out in the real world I also acquired many anecdotes about pump alarms going off in public and other peoples’ reactions to the whole feeding tube situation. Stories for another time.

Unfortunately my feeding tube success was short-lived. By the summer things were going downhill and by the fall I was in the hospital on TPN. Which brings me to lifeline number two. My central line: 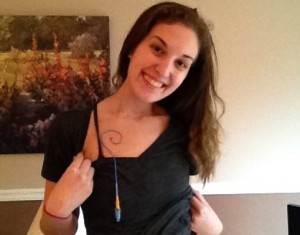 I wrote several posts during my time in the hospital that talk more about TPN, but here’s a quick refresh. TPN stands for Total Parenteral Nutrition. Enteral refers to the GI tract (tube feeding is called enteral nutrition), the prefix ‘para’ means beside or to the side of, so put it together and ‘parenteral’ nutrition is nutrition that doesn’t involve the GI tract and instead is delivered intravenously. Because TPN is really hard on veins, it can’t be administered in peripheral IVs, the ones you usually see in wrists and forearms. Instead it must be delivered through central line IVs. My central line, as you can see above, goes into my chest and then is tunneled up under my skin, over my collarbone to where it actually enters my circulatory system at my internal jugular vein. From there it is threaded down through my veins and the tip sits right at the junction of my superior vena cava and the right atrium of my heart. There’s another children’s book in that journey, I’m sure! Up close you can actually see and feel where the line is tunneled…cool? Creepy? Perhaps a bit of both.

Unlike feeding tubes which don’t require sterile care but just the same amount of cleanliness you would use for preparing food, because this line goes directly into my bloodstream sterility is of the utmost importance. Basically this translates to a ton of hand sanitizer and alcohol swabs up the wazoo. It makes showering an adventure in saran wrap and tape. Similar to my feeding tube, I can’t feel this line either. It does, however, feel cool (temperature wise, not like “wow, cool!”) when I flush saline through it.

What most people don’t realize is that TPN is usually specially formulated for the patient. With tube feeding, there are tons of different formulas available and different people will use different ones depending on their needs, but my TPN is made specifically for me. I get bloodwork done every month to monitor my electrolytes, blood chemistry, hydration status and liver function and then if any of those levels are off my TPN prescription can be adjusted accordingly. The TPN itself is made at a pharmacy in Calgary, gets shipped to the Burnaby location and then is delivered to me every two weeks. In order to prolong the life of the TPN so that biweekly delivery is possible, it must be kept in the fridge. The bag comes with two chambers, one for lipids, and the other for amino acids, dextrose and electrolytes. Right before I hook up for the night I remove the divider, mix it all together and use a needle syringe to draw up and add two vials of vitamins.

So here’s what 24 hours of keeping me alive looks like in medical supplies:

Yeah, I have a sharps container in my bedroom…you don’t? And yeah, that’s a lot of packaging and waste, however thanks to my aunt the recycling guru we have found a way to really cut down on the garbage! If that’s just 24 hours, and I get two weeks of TPN supplies at a time, plus feeding tube supplies, you can imagine that storage becomes an issue. Basically this means that I have medical supplies stashed everywhere…I’m pretty sure there are even some cases of formula in the shoe cupboard under the stairs. Oh, and then there is the full size fridge for the TPN itself.

And even though I’m on TPN right now and not using my feeding tube for nutrition, I still use it every day. I take most of my meds through my tube, either in liquid form or crushing up the pills that I can. Sometimes just drinking enough to take pills can make me nauseous and bloated so bypassing that is a huge relief. Plus there is the fact that when your stomach has somewhat erratic function being able to put meds right into your intestine, instead of waiting hours and hours for them to kick in, is a big help.

So all of that is how it works. But what does actually living it look like?

Well, sometimes, with the right lighting, a well-timed shower and a spurt of energy, it can look like this: 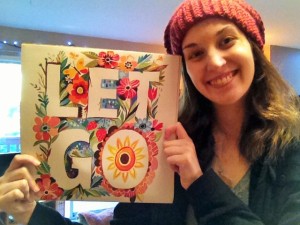 Lying on the floor because I’m too lightheaded to sit or stand, ice pack around my neck to try and calm the intense nausea, dark circles below my eyes (and actually above them too, because I’m just that skilled). And often it looks like this:

Done. Just so done with the day, with life, with reality. Ice pack on my head because it’s the only thing that soothes a two-month headache, no energy to keep my eyes fully open. And, since I’m already sharing the selfies that are going to turn me into a model one day, a lot of times it looks like this, too:

Also done. Hair that needs washing, puffy eyes from new medication that isn’t even working, desperately wishing for a break from my body.

Sometimes brushing my teeth is enough to make my heart race at 150 beats per minute. Sometimes taking a shower is enough to knock me on my back for a day or two. Sometimes I can’t sleep at night because I’m nauseous. Sometimes I’ll be okay one minute and lying on the floor with my feet up in the air the next in an effort to avoid potentially passing out. Sometimes I feel hungry, take a few bites of something, and then spend the rest of the day paying for it. Sometimes I lie on my bed for hours doing nothing, not sleeping but not really awake either. Sometimes I go crazy with boredom because I have no energy to do anything, but enough mental energy to know that doing nothing is boring. Sometimes I cry because I’m impossibly frustrated with my life. And sometimes I yell out, “That’s it! I can’t be patient anymore! This isn’t fair!” and then I slump down to the floor because I know there is nothing I can do but keep waiting, remain patient, and accept that life isn’t fair.

It’s really hard sometimes, but sometimes it’s really wonderful, too. Everyone can relate to that, I think. At the end of the day, don’t get me wrong here, I’m incredibly grateful that science has figured out a way to keep me alive even though I can’t eat. At the end of the day I’m incredibly grateful that there are still reasons to smile and laugh.

And I’m also incredibly grateful for you, for taking the time to read this and making me, and everyone else facing the same struggles as me, feel a little less invisible.

So thank you! And once again, Happy Feeding Tube Awareness Week!