If I had to pick my finest hour, I would not pick yesterday between 3:00 and 4:00pm. Seeing as I’ve lived approximately 225 495 hours at the time of posting this blog (there are places on the internet to calculate such things for you), I have no idea which hour was my finest, but I can say with absolute certainty that yesterday between 3:00 and 4:00 is not even in the running.

And now I shall tell you a long story.

Before I left, as I do before I drive to any unknown location, I zealously mapped out my route and my back-up route. Google Maps told me it would take 24 minutes, but I gave myself 45 to account for extra traffic, and because being late is honestly one of the most stressful experiences for me. If we run into traffic on the way to a really painful medical procedure, I will genuinely be more stressed about not being on time than I will be about the procedure itself.

I’m not even kidding.

I’ve been like this my whole life. When I was in high school, Mondays made me nervous because that was my mom’s day off and since she didn’t need to get to work, my siblings always wanted to leave 10 minutes later in the morning. We left at 7:50 on Mondays instead of 7:40, which meant we arrived at school between 8:10 and 8:15 for an 8:25 start. But what if there was unexpected traffic? Or what if, as per usual, my brother wasn’t ready until 7:52? I started dreading Monday mornings on Sunday nights, that’s how much I hated even the chance of being late.

There are many more examples. You should ask Holly about the time at the Bellingham airport when I couldn’t find a parking spot.

I’m not particularly proud of the fact that the fear of being late transforms me into an agitated, stressed out, snappy person, especially since I hardly ever end up actually being late. It’s just that the possibility of being late makes me anxious. Heck, even sitting here and thinking about being late is making me anxious.

Anyway, back to my story.

I was driving to New West. The street I needed to turn down wasn’t obvious and I missed it. Woops. My back up plan was then foiled by a no left turn sign where I needed to make a left turn. Yikes. As possible get-back-on-track plans started racing through my mind, the busy traffic turned to gridlock. I was stuck. At 3:16 I started crying. My appointment started in 4 minutes and all I knew was that there was no way I could get there on time.

(I was on the 10th Avenue, by the way. Feel free to share your own 10th Avenue tragedies with me.)

Finally traffic moved enough that I was able to turn right down a side street and start heading back in the direction I needed to go, except I was on the other side of 10th and the street I was looking for doesn’t exist there. And then I was lost, but even more than that I was stressed and upset. My appointment had already started, I had no idea how long it would take me to get there, and I was in no shape to see a new doctor who I was hesitant about seeing in the first place.

So I pulled over on a random residential street and parked my car. I called the clinic. I lied and told them my car had broken down and I couldn’t make it. And truthfully, it wasn’t a total lie…my car was okay but I, the driver, had in fact broken down. And then I sobbed my eyes out for about five minutes before pulling it together (sort of), wiping my nose on my shirt sleeve (because when are meltdowns ever glamorous affairs?) and driving home. 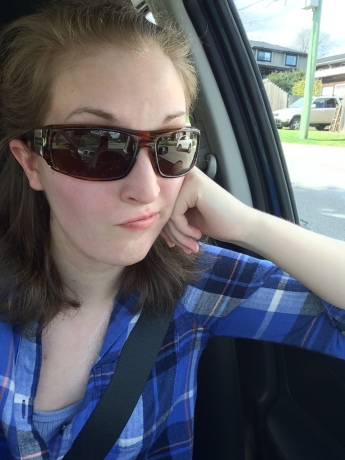 If I’m being honest, my biggest motivation for pulling it together was that there were some parents walking their kids home from school and I was worried that one of them might call the police on me for suspicious behavior…I was, after all, wearing sunglasses, which all suspicious characters tend to do. The thought of explaining to the police why I was ugly crying over such an insignificant situation was embarrassing. What if it went on my record? It was safest to just drive home.

And that’s my story. It’s kind of sad, but it’s also kind of funny so if you find yourself wanting to laugh at me, it’s okay because now that it’s a new day I’m laughing at me, too.

I’m exhausted from holding onto hope because believe it or not, hope can be exhausting. It’s hard to be hopeful that things will get better when things always seem to be getting worse. It’s hard to have hope that someone will be able to help me when everyone is at a loss. Hope is tiring right now.

Tiring, but still important. Still necessary. And still worth it, even when it takes all of my extra energy, and even when it means melting down in my car and missing an appointment. And even though I’m tired from being hopeful, I’m not tired of being hopeful. There’s a difference. Hope is wearing me out, but it’s also what’s keeping me going. Life is like that sometimes. So I keep hoping.

And I keep laughing, especially at myself.

I’ve rescheduled my appointment for next week. My sister helped me figure out another route. I’ll probably leave an hour early to be safe. And hopefully I won’t meltdown in my car. No promises, but I’m hopeful.

Exhausted, but still hopeful, and that’s all that matters just now.

P.S. I have put a box of Kleenex in my car for future such incidents, just in case.

23 thoughts on “Not my finest hour”